Contemporary Six presents a solo show by Jim Moir. The preview will be on the 12th of November from 6-9pm, please RSVP at [email protected]

“Jim Moir AKA comedian extraordinaire Vic Reeves has been making paintings, prints and drawings since the early 80s. The name Vic Reeves may be synonymous with the comedy scene, but It’s Jim Moir who you should keep an eye on.

A true northern lad hailing from Leeds, Moir started off by studying mechanical engineering before realising a rapid change of career paths to comedian was in order. While his budding career as a comedian began Moir’s life as an artist also stuttered into being as he enrolled at art school in London. In the beginning Moir was quite the traditionalist making reproductions. Copying the works of Jacques-Louis David and selling them to make a quick buck. However almost as soon as Jim started dedicating his life to art, up popped Vic Reeves. Which, it could be said is the most successful performance art piece to come out of Moir’s psyche to date.

Voted one of the 50 funniest acts in British comedy, Moir is known for a multitude of achievements and is now considered a British Institution. You may know Moir for his work on Vic Reeves Big Night out, Toast of London or even Coronation Street! I hesitate to mention Moir’s previous life on Shooting Stars as the artist has evolved into a whole different being, but I would be remiss not to do so. A British panel show Shooting Stars was comprising of the double-act Vic reeves and Bob Mortimer. His comedy is surreal, it is dark, and it is pure anarchy. It is this surrealism that is ever so present in Moir’s art. The display of the uncanny and bizarre has informed his career to such an extent that the line between Vic and Jim sometimes bends and blurs. For example, during a documentary titled ‘A Film of Reeves & Mortimer’ Moir buried his classic car in his back garden to make a sculptural statement.

His keen interest in the art world has always overlapped with his comedy, in 2011 he presented ‘Vice Reeves’ Turner Prize Moments’ where he looked back at the art prizes most memorable and comedic moments. Moir is undoubtably an artist accumulating a lot of attention and success as a painter- his work is something no collector would want to miss!

I think the best way to explain Moir’s work is that he’s telling the truth. He is being brutally honest with himself and thus with the viewer. His work is unfiltered, and he makes what feels right in the moment. Be that a painting on pop culture, some pencil drawing caricatures or naturalist bird watercolours. The subject matter is mischievous and the colour palette vast. One cannot possibly pigeonhole this artist.” 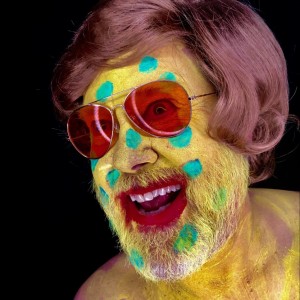